Forcast displayed for Harbor Springs, MI
The location could not be found. 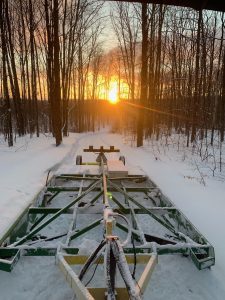 Bottom Line – We NEED more snow!! We received roughly 5-6″ on Thursday the 19th & roughly 3″ on the 24th. Even though we are at the end of January this is considered early season riding.

Railroad Grade (Trail 7) – Last Groomed on Monday the 23rd and is Fair Condition, there is a good base but not much to work with out there.