Four Flags Snowmobile Club has pulled together and even the mud didn’t dampen the spirits of getting the trails ready! 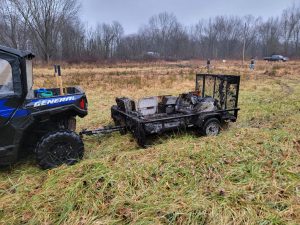 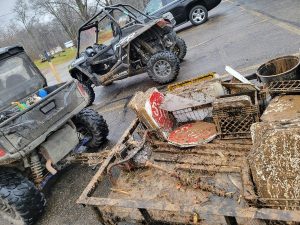 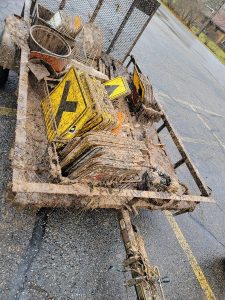 Straits Area Club is still up and running and we are working hard to get our grooming tractors, drags, and the trails ready for the winter. 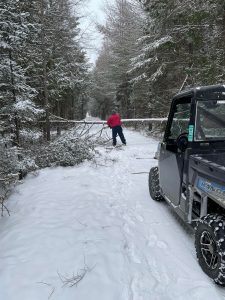 From beavers to wind damage and clearing the trails of trees the trail work never ends for the sponsors!

Railroad Grade between Huckleberry Rd and M-123. Water is at least 12” deep and flowing across the trail.
Caused by beavers clogging up the culvert. 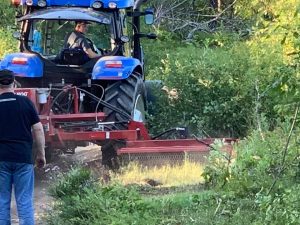 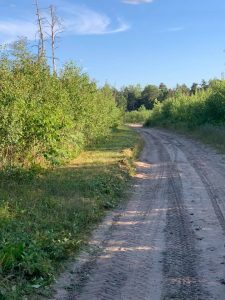 Lewiston Area Grooming had another great day brushing the trails. Please volunteer if you can. We still have a lot to do before November. 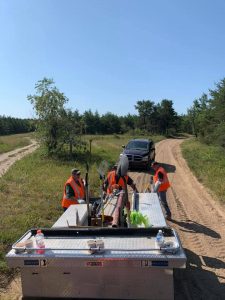 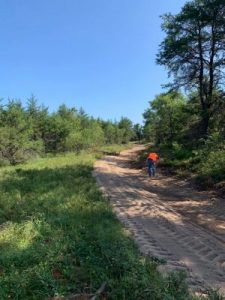 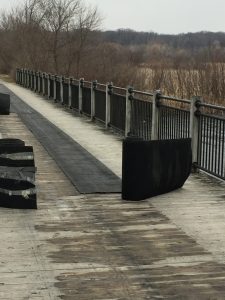 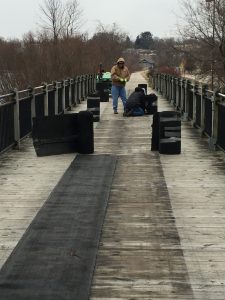 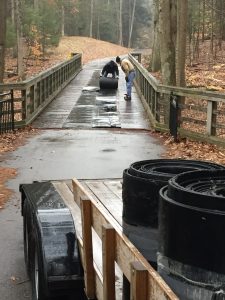 Trail update! Thanks Skip for all the help today and use of your truck and trailer we got a lot done for two old farts . We are working tomorrow if anyone wants to help meet at Williams restaurant in Barryton at 7:30 am  https://www.facebook.com/peremarquettesnowmobileclub/videos/2139180876316237/

Cheboygan Trailblazers received and installed the temporary bridge over the Little Black River connecting the North Central Trail and the North East Trail to Cheboygan and Mackinaw City. Without the combined efforts of MISORVA- the Trailblazers and some local contractors snowmobilers would be riding pavement around the bridge closure. 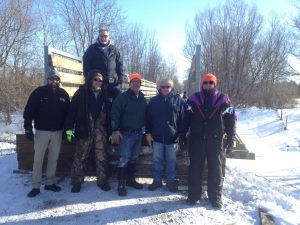 I must start this column by paying tribute to one very special volunteer — our MISORVA vice president Al Green. Al passed away in November 2013. Al was involved in just about all aspects of organized snowmobiling. He was involved in everything from serving as an elected official to serving as a committee chairman and volunteering to help. He also served in organizations that either directly or indirectly involve our sport.

Al enjoyed grooming as much as he did snowmobiling, and he did it with a passion for perfection. Less than a week before Al’s passing, he worked tireless for three days at the Novi Snowmobile Show. While there, Al did what he did well — he promoted MISORVA and the importance of MISORVA to snowmobiling. There is another article on Al Green in this magazine. Look to the article for more details on his achievements and dedication to snowmobiling. Al will be missed!

Dedicated volunteers, along with our office staff, help make our MISORVA events successful. Bill Manson and Karen Middendorp spend hours planning most of our events; many times taking work home during the week and working events on the weekends. In my way of thinking, Bill and Karen are also dedicated volunteers.

For the past four years our MISORVA Snow Show was held in an outdoor venue in Martin, Mich. Because of the time of year (mid- to late- September) volunteers endured rain, sleet, and cold weather promoting our organization and working the show. MISORVA volunteers donate their time and pay their own expenses. Of all of the organizations I’ve been a part of, MISORVA has the most dedicated and loyal members.

Take a moment and think about what snowmobiling means to you. In my case it’s not just about the trips or the sport, but the long-lasting friendships developed over the years. Most of these friendships are not just in the season, but year around, life-long friendships, which include our families becoming friends.

MISORVA is looking for individuals who could move into leadership roles. Don’t just set on the side lines, become involved. Remember if each of us brings in a new member, our organization would double in size. Numbers do matter.

Ride safe, track side down!

The following businesses and clubs have donated to the financial future of MISORVA.

Make MISORVA Your Charity of Choice! The Future of Snowmobiling in Michigan Depends on it!